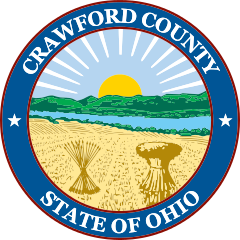 We are very proud of the architecture and beauty of our Courthouse and Courtroom and invite you to come take a look for yourself.  Although we have displayed several photographs throughout this website, no photograph can compare to the true splendor of an in person view.

Crawford County is named in honor of Colonel William Crawford. Col. Crawford served in the French-Indian War as a soldier and in 1776 entered the Revolutionary War as a Lieutenant Colonel. His last battle was fought in 1782 against the Wyandot and Delaware tribes. The march of Crawford’s army began in May 1782. On June 4th his troops began the battle of Sandusky. At dark, on the first day of the battle, victory was with the Americans. Firing began again the next morning and continued through the day. During this day plans were made for a general attack at nightfall, but while plans were being made, more troops, all mounted, were spotted making an advance on the camp. It was decided that the contemplated attack must be abandoned as the enemy’s force was much more superior in numbers to theirs and the risk would be greatly hazardous. Crawford began assembling his troops for a retreat but before all preparations were complete for an orderly movement, the enemy opened fire causing some of the front line to hurry off with those in the rear not slow to follow. Many wounded where left behind in the confusion, some escaping by horseback. As the army retreated, Col. Crawford tried to locate his son, John, who was battling with his army. His horse gave out and Col. Crawford was forced to move eastward on foot. On June 7, Col. Crawford with one of his aides, Dr. Knight, was captured in an ambush. Dr. Knight, who with Col. Crawford was beaten with fists, stones, sticks and clubs, lived and later escaped his captors. But prior to his escape he was an eyewitness to the torturous murder of Col. Crawford on June 11, 1782. In honor of Col. Crawford, a statue has been erected within a niche to the left of the doors on the Mansfield Street side of the Courthouse.

Our Courthouse was built in 1854.  Some of the requirements for the building included that the walls be constructed of good bricks and that they be at least sixteen inches thick.  The outside of the building had the appearance of an old roman building with wide steps leading up to a pediment that was supported by four wooden columns.

In 1893, because of space limitations, the County Commissioners put on an addition twice the size that had been set-aside for the basic Courthouse.

In 1908, the cornerstone was laid for another addition.  This renovation gave the Courthouse its present appearance as well as adding additional space.  Stone was put over the bricks, stone pillars replaced the wooden columns and the Common Pleas Courtroom was remolded.

The architect was Harlan Jones of Mansfield, Ohio.  Under his direction, the County Commissioners bid for a stained glass dome to be the centerpiece of the beautiful new Courtroom.  Bryant Art Glass of Columbus, Ohio was awarded the project.  They had presented a design of five main panels with a kind of classical theme.

From 1908 to 1979, the stained glass dome had nothing done to preserve it.  A committee of past elected county officials and concerned private citizens was established to acquaint the public with the need to preserve this historic Courthouse, a part of our local heritage.  In 1979, a new skylight was installed over the dome because of the deterioration of the original skylight.  This halted the leaking through the dome.  Funds for this project came entirely from donations from private citizens, organizations and the Timken Foundation – people who were deeply concerned about the preservation of this unique and beautiful stained glass dome.  Along with the restoration and preservation efforts completed to the ceiling dome, other aspects of the Courtroom where also updated and repaired bringing it to its present appearance.

Acme Art Glass Co. of Grove City, Ohio was awarded the contract to restore the stained glass for $21,500.00.  They completed the project on schedule doing an excellent job.

Kiess Electric Co. of Bucyrus, Ohio was awarded the contract for the repair and replacement of lighting around the dome and installation of a new lighting system above the dome for a total cost of $2,300.00.

Harry Hofmann was awarded the contract for the painting around the dome, and installing the ceiling and side-wall tiles for a total cost of $2,296.00

Murphy Linoleum of Bucyrus, Ohio was awarded the contract for the installation of the carpet for a total cost of $4,620.00.

The next addition to be completed started in August 2000 with the old jail being torn down and replaced by an extension to the Courthouse, doubling the size of the building.  All county administrative offices that had been located in the Courthouse moved their offices to what is now referred to as the Administrative Building and the County Prosecutor’s Office was moved into this new addition from the Crawford County Offices Building located on Walnut Street across from the Courthouse.  A point was made to assure that this addition would look like an extension of the Courthouse rather than an addition.  The exterior bricks used to cover the extension where selected to match what was currently covering the exterior of the Courthouse with the exception of the bricked corner located to the right of the new ramped entrance to the Courthouse off Walnut Street.  This section of bricks is dedicated to the structure that once stood at that location, the old jail.  Some of the architectural features of the jail where retained and restored, then used throughout the interior and exterior of the Administrative Building extension.  This project was completed in October 2001 with costs totaling $5,867,820.77.  The total cost includes all aspects of the building extension: Construction and Architect Fees, Communication System Wiring, Telephone System, Furniture, Equipment, Landscaping, etc.

In August 2002 work began on the remolding of the existing Courthouse with the intension of bringing all the county courts into the building and updating the mechanical aspects of the building to support the needs to today’s computerized world.  This project was completed in June 2004 with costs totaling $4,063,709.45.  The completion of the project allowed the Municipal Court to move to the basement level and first floor of the Courthouse from its previous location at the Crawford County Offices Building located on Walnut Street across from the Courthouse.  Probate and Juvenile Court occupy the other half of the basement level and first floor.  The Common Pleas Court remains on the second floor and is also partially housed on the third floor.